‘The saxophone and recorder (yes, recorder!) definitely give it an extra twist, and the guitar work is impressive throughout. Bordello Rose is a band prepared to think outside the box’ 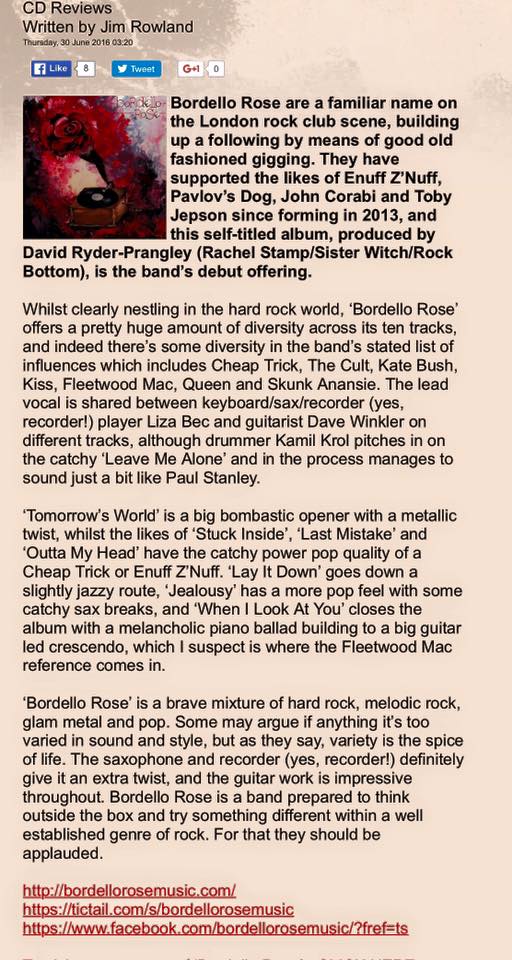 To get us in the mood there was also a short but impressive acoustic set from Bordello Rose or to be more accurate half of them, guitarist Dave Winkler who is a well-known face on the London melodic and glam rock scene and Liza Bec who played a variety of instruments from penny whistle to guitar. Their voices intertwined well while ‘Jealousy’, with Liza’s sax solo, was the nearest we will get to witnessing the great Quarterflash in the UK. An acoustic cover of Maiden’s ‘Wasted Years’ was another great surprise.

‘ they impressed in this laid back stripped back form.  With quality songs like “Outta My Head” and “Jealousy” from their début album (which is in the mixing phase and is due out in June) both Liza and Dave traded vocals and some excellent guitar work.

Finishing with a surprise workout of Iron Maiden’s Wasted Years which included Dave saying a line that in the 26 times I have seen Maiden I have never heard – ” Now a recorder solo !!”

“…It all meshed together and was really rather good … with songs like “Outta My Head” and “Jealousy” and the trading of sax and guitar solos, a band to look out for.”

“..Liza’s voice was truly unique, and when you added her abilities on the saxophone, recorder and keyboard to the equation, you had a potent combination… worth keeping an eye for!”

“Influenced by artists as varied as Queen, Cheap Trick, the Cult, Garbage, KISS and the Wildhearts, their set is indeed a real mix of styles and is very entertaining… Overall the set is fun with tracks including a great mix of sax and keyboard work from Liza. Dave’s guitar playing showcases the experience gained from several years playing with other bands.

…as the crowd grows, so does the appreciation for Bordello Rose.”